It is really fabulous that you can use your Canon, Panosonic, JVC, Sony Full HD camcorders to capture moment in holiday, wedding, birthday and so on. Whereas, the problem is that what can we do with these video recordings in MTS format? You may easily find that MTS is not readable with QuickTime, iPhone, iPad, etc. To play, edit MTS files from camcorder(You can refer to Top 3 Ways to Play MTS on Mac if you have no idea how to get your MTS files playable on Mac OS X.), you may need to convert MTS to MOV on Mac, a QuickTime movie file that widely used on Mac system, and it can be easily edited – no need to rewrite data after editing. What you need indeed is a MTS converting tool to get the job done. This article just provides Top 5 Free Online MTS to MOV Converter for Mac that definitely worth your time to give it a try.

Benderconverter supports the conversion of MP3, Avi, Mpeg, Flash video, iPod / iPhone, iPad, Gif, Jpeg and other popular formats. This free online mts to mov converter lets you convert videos less than 100 MB. If your mts file is beyond the limitation, you will need to register it to get more benefits. Then the max file size would be 500 MB. 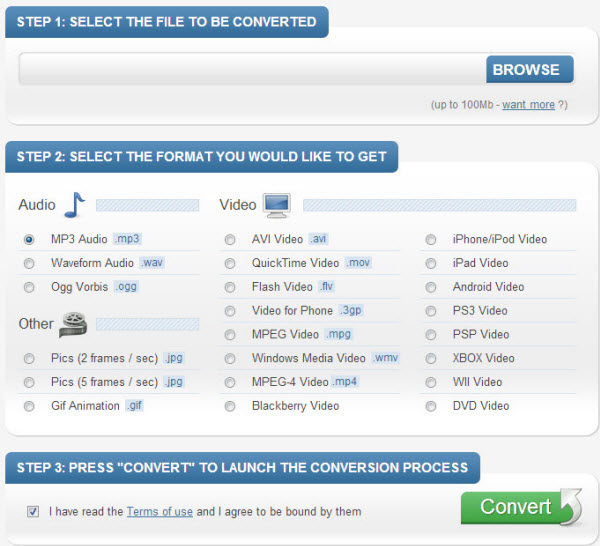 Convertfiles supports converting video, audio, image, document, presentation, and etc. For converting mts to mov online, your source video should be less than 250 MB. It allows for more than 330 combinations of input and output file formats. With this free online mts to mov converter, you can convert almost any video.

Cellsea video converter lets you convert videos to AVI, MOV, MPG, VOB, and etc. The mts file uploading process is a little slow and will take you some time. After uploading the mts file, it enables you to personalizes the mts according to your preference. Actually, Cellsea is totally a video converter and video editor. After the editing, you can convert your mts to mov online for playback.

ClipConverter, another free online MTS to MOV converter, only supports converting video by entering url in the blank box. The output formats are MP3, M4A, AAC, MP4, 3GP, AVI and MOV. Its main feature lies in that you can set the beginning and end of your video to be converted. It means that it supports converting a part of the mts instead of the whole video file.